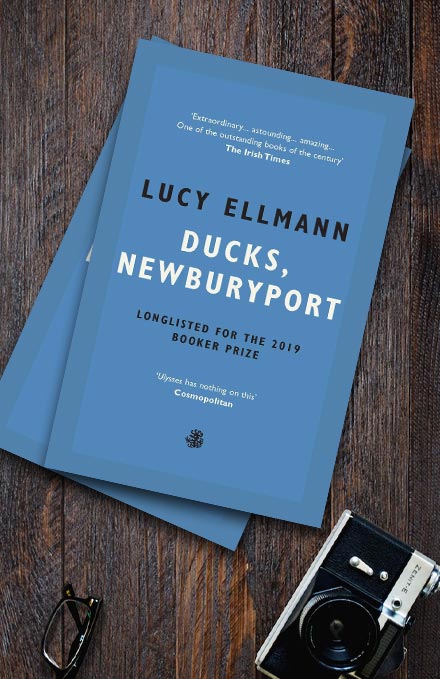 Reviewed by Adèle Geras, in conversation with guest Sally Christie.

Sally Christie has been a children's book editor and a writer of young fiction. She has also been a goat keeper and a cheese maker, both of which were a lot less stressful. She lives in Cambridgeshire with her husband; they have two grown up children.

Towards the end of March, my friend Sally Christie (author of The Icarus Show and Spirit) wrote to ask me whether I’d heard of a book called Ducks, Newburyport by Lucy Ellmann and whether I’d consider reading it so that she might have someone with whom she could discuss it. Sally thought the length might deter me (1100 odd pages) but I’d not read it up to now for quite another reason. I knew its reputation. It was shortlisted for the Booker Prize in 2019. I'd avoided it because it was written in a ‘stream of consciousness’ style and I’m very bad at that. I do not wish to read Ulysses by James Joyce (we'll return to that) and struggle sometimes with Virginia Woolf.But Sally is a discerning reader whose judgment I trust, and the Kindle app is very obliging, so I downloaded a free sample. As soon as I’d read that, I bought the rest of the book.

It took me an entire month to read it. I can finish a normal sized book in a few days. So, on a perfect May morning, Sally and I sat in her glorious garden, and encouraged by Mouser the cat and sustained by Sally’s delicious home-made chocolate biscuits, we began to talk about Ducks, Newburyport.

I described my experience of reading it as being like jumping into someone’s head and going round and round on a kind of helter-skelter through every one of her thoughts. The unnamed heroine is a housewife in Ohio, baking cinnamon rolls at the start of the book. She has a husband and children. Her parents are dead, but her relationship with them is still very much alive.

The narrative takes the form of a list, and every separate item begins with the words: The fact that. They return like a refrain, (or less romantically, like bullet points) all through the book. Sally suggested that perhaps Ellmann was in a way laying out evidence for a case she’s making. She imagined a US attorney standing up and putting a whole lot of different facts before the jury. This makes perfect sense to me.

A case for what? We decided it was all sorts of things: the desperate state of so many aspects of life in Ohio in 2019, the weight of a history both blood-soaked, cruel and tragic but also inspirational. The works of Laura Ingalls Wilder figure large. We agreed we’d learned a huge amount but also that we’d laughed aloud often. I saw one thing coming long before it arrived in the book. And we both wondered about what we referred to as ‘the lion bits’.

There are passages scattered through the novel in which the life of a mountain lion, her cubs and their adventures are described. I have to confess I rather skim-read my way though some of these, but we decided that even though they play a part in the plot, especially for one of the characters, they were partly there as a kind of palate cleanser, for anyone who needed a break from rivers and rivers of prose.

We could both see that this book was very carefully put together and worked out. It gives the impression of a torrent erupting naturally from the earth, but in reality it's more like an intricate 18th century water feature: complex in design and spectacular in appearance. A miracle of engineering.

When you reach the end (and there are events. Things happen. People are changed...) you see the world differently. We now both miss our Ohio housewife. I think of her as Lucy, but Lucy Ellmann may or may not resemble her. One thing is true, though: she’s the daughter of Richard Ellmann, biographer of both Oscar Wilde and James Joyce. Perhaps this book is Ellmann’s tribute to Ulysses. Sally said she intends to read that. I do not.

To sum up: we both loved it and are very happy that it’s now part of the furniture of our minds. Mouser is reserving judgement….