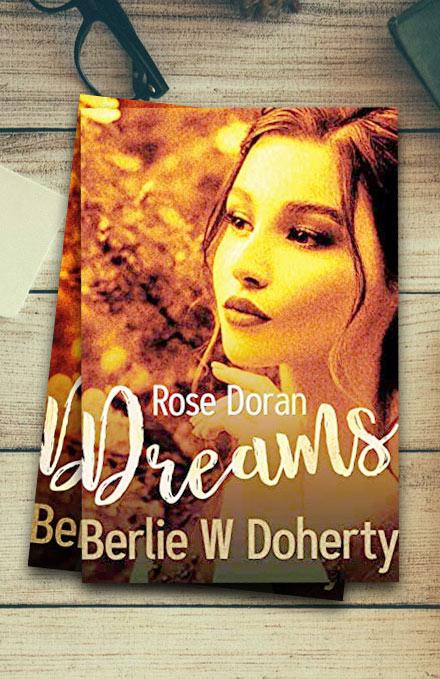 "I decided to rename it because Rose Doran had changed, or my understanding of her had changed."

Berlie Doherty writes novels, plays, stories, poetry and opera libretti and is translated into over twenty languages. She has written over 60 books,, mostly for children and young adults, Several of her novels have been dramatised for radio, television and the stage. She has won many awards including the Carnegie Medal twice (Dear Nobody and Granny was a Buffer Girl), and the Writers’ Guild award twice (Dear Nobody and Daughter of the Sea), received a Boston Globe-Horn Honor, and was nominated for the Astrid Lindgren award. For adults she has written many radio plays and short stories, and one other novel for adults, requiem.

The Vinegar Jar was first published by Hamish Hamilton in 1994. Berlie has now reissued it, transformed into Rose Doran Dreams. Linda Newbery, Celia Rees and I sent Berlie some questions after we'd all read her book....here they are, followed by a short review by me. Find out more from her website.

Celia:  Did you feel tempted to update the novel in any way?

Berlie: No, I wanted to keep it in the period of late wartime – post war childhood.

Celia: What did you feel happy about from the original novel?

Berlie: All the ’stories’, traditional and invented. I hardly changed a word of any of those, though I did sometimes change the order to point up what was going on in Rose’s real world.

Celia: Was there anything you were itching to change?

Berlie: Gordon’s perception of Rose. I wanted to explain his sexual coldness towards her. I wanted to build up the sense that he adored her but couldn’t touch her. I found Gordon a very interesting character to develop.

And I wanted to change the ending. Interestingly, I wrote different endings for the English edition and the American edition of The Vinegar Jar - and I still wasn’t happy!

Linda: How did it feel to go back to your early work with a view to reshaping it? What made you decide to revise (and rename) rather than simply reissuing the book?

Berlie: It was a strange thing to do. I’ve never read one of my own books from beginning to end before, after the editing process. It’s so long since I wrote The Vinegar Jar that it really felt as if somebody else had written it. I was very sad when Hamish Hamilton took it out of print. It became an e-book, no cover, no publicity, and lay there like a lump of dead wood that was ready to become kindling. I’ve just thought of that and it’s quite a nice pun! Anyway, I decided to revisit it for something to do in lockdown. I felt quite a lot of it, especially in the first half, was underwritten and needed enhancing both in style and in content. Even down to the use of punctuation, it was as basic as that. A friend told me she had no idea what was going on, so I knew I had to put that right. It was a challenge.

When I re-read it I felt I liked the book but that it could be a lot better. Revising it became a major project, I loved doing it, and it really absorbed me.

Linda: I like the way you let us fully understand how Rose's longings and frustrations lead to her fantasy with Paedric, but also you allow us to see how strange her behaviour seems to Gordon and Edmund. Was this difficult to pull off?

Berlie: This was one of the things I hadn’t achieved in The Vinegar Jar. Things just happen and aren’t explained. As soon as I thought about Rose Doran being in some sort of psychological breakdown I began to understand her and could find ways of justifying her psychic relationship with Paedric. Also I was able to ask myself questions about her relationship with Gordon and Edmund, the effect on them of her alienation, and their helplessness in trying to make sense of it.

Linda: I felt that Rose was often unkind to Edmund, yet he remains devoted to her and apparently endlessly patient, despite the limitations to his own life. What do you see as his future (if you do?)

Berlie: In The Vinegar Jar he mentions a girlfriend, but the reader hears little about her, as if perhaps he’s just making her up for Rose’s benefit. But in Rose Doran Dreams she’s really there, and we meet her. Like Rose, I would want his future to be with Molly.

Adèle: Rose Doran Dreams moves from being an almost D H Lawrence-like realist story, to containing elements of fairytale and fantasy. How do you think each “strand of thought” (if I can call it that!) enhanced the other?

Berlie: I don’t think one would have worked completely without the other. Rose’s imagination is a kind of psychosis, and I hope she shocks the reader as much as she shocks Gordon with her erotic story of the shivering mountain. It’s as if she can’t help it, and she slips from reality into fantasy without being aware of it or of its effect on others. But as for the realism, although she was a child who loves stories (and who doesn’t!) I needed to show her as being rooted in earth, and not just a dreamy child with her head in the clouds.

Adèle: Some of the ‘realist’ story had such a strong feeling of being true that I wondered whether there was any autobiography in the mix. Can you tell us?Berlie: Not to my knowledge!

Adèle: I thought parts of the novel were Angela Carteresque. Is she an influence on your work? Can you name other writers who might have had an effect on this book?

Berlie: I can’t actually, though I’m very honoured that you’ve made that connection. The fact is that I love fairy stories, and yes, magic realism, though I didn’t know that term when I wrote TVJ. I do love Angela Carter/Isabel Allende/ Neil Gaiman, Salman Rushdie/Joanne Harris …

But also D H Lawrence (that reference interested me, Adele! Barry Hines/Arthur Miller/ Shelagh Delaney … It’s strange isn’t it, you don’t know when you’re writing something how much, or if at all, you’re affected by your reading.

Adèle: Can you see RDD as a film or play? If so, where would you film it?

Berlie: Yes, a film. It is visual. Or a radio play, for the same reason. And if a film, Edale (where I live). It’s not Edale, many of the geographic features don’t apply to Edale but the railway runs through it (and is an important character in the book) and the caverns and hills of Castleton (the Mam Tor story) lie just beyond it.

Berlieis an enormously prolific and successful writer whose prose has two distinct qualities which are blended together perfectly in this latest book. On the one hand, she's a sharp, clear realist writer, bringing historical periods to life in a plain and direct way that speaks straight to the reader. Then there's the lyrical, poetic style which comes to the fore quite often in Rose Doran Dreams. The fairy tale atmosphere of this novel provides an excellent background for what are literally flights of fancy. The writer Angela Carter would have enjoyed reading this book.

Anyone who's read reviews by me knows that I don't like giving away the plot of a novel, and in this case the narrative moves through different iterations of love, and obsession. It centres on children, and our eponymous heroine experiences young love, then an unusual marriage and then a relationship which stretches her emotions (and those of the reader) to the limit. You will end up in a glorious tangle of true and imagined and it's part of the pleasure of the story that you'll be going over it in your head long after you've finished reading it, sorting out what you think has happened or is happening. It's a very visual book...I think it would make a terrific movie.